After Years Struggling To Sleep, Hi-Tech Goggles “Gave My Wife Back Her Life!”

After years of disrupted sleep and feelings of utter exhaustion, Leticia Lewis is finally getting a good night’s rest. And she owes it all to a new pair of glasses.

“I was willing to try anything,” said the 54-year-old resident of Spokane, Wash. “It sounded strange but I thought, ‘Who knows? Maybe there’s something to this.’”

Called Re-Timer, the eyewear doesn’t correct her vision. Rather, the pioneering product, which resembles a cool pair of hi-tech goggles, can improve sleep and reduce tiredness by helping to re-time sleep rhythms.

How it works is simple. Using a patented technology, the glasses emit a UV-free green light that mimics the effect of sunlight and helps to reset a person’s body clock, enabling the body to recognize when to be awake and when to sleep.

When Leticia’s husband, Randy, 58, first showed the glasses to her on-line, she was sceptical and yet hopeful at the same time.

“It made sense that my cycle could be off,” said Leticia, an elementary school teacher and piano instructor.

“I was at the point where I couldn’t function throughout the day if I didn’t have a short power nap.”

Leticia’s sleep troubles began several years ago. She would fall asleep at 10:00 p.m., only to find herself wide awake by 2:00 or 3:00 a.m. After months of lying in bed fully alert, she was in the habit of getting up to do things, returning to sleep at 6:00 a.m.

Her sleep patterns were so debilitating, she found she didn’t have the energy to hike, bike and garden like she used to. Every day before heading off to work, she’d have to have a nap.

“Ever since I was a young child, I was one of those people who would go to sleep and not move until the sun came up,” recalled Leticia. “I would get up and go, go, go. It had been so long since that happened, I couldn’t remember what it felt like.”

Before purchasing her Re-Timer glasses in June, 2014, Leticia tried everything from natural remedies like melatonin, lavender baths and relaxing sounds, to no television or computer screens before bed, and finally prescribed sleeping pills.

“I had tried everything.”

What she likes about Re-Timer, is the simplicity. Developed through 25 years of research by university professor and world renowned sleep psychologist Professor Leon Lack, the Re-Timer glasses are completely portable so users can go about their daily routines while using them.

Until recently, people have relied on light boxes – boxed units with a side of translucent glass or plastic that contains an electric light – to get the visual bright exposure they need, which meant they had to sit close to the box daily and look at it for about 30-60 minutes to benefit, according to Professor Lack. With Re-Timer glasses, people have a more convenient and effective way to successfully shake off insomnia.

“The Re-Timer glasses are so easy to use – all you have to do is go on the website and punch in your current sleep cycle, and it tells you when to start wearing the glasses and for how long,” she explained, noting that the schedule will be different for each individual. 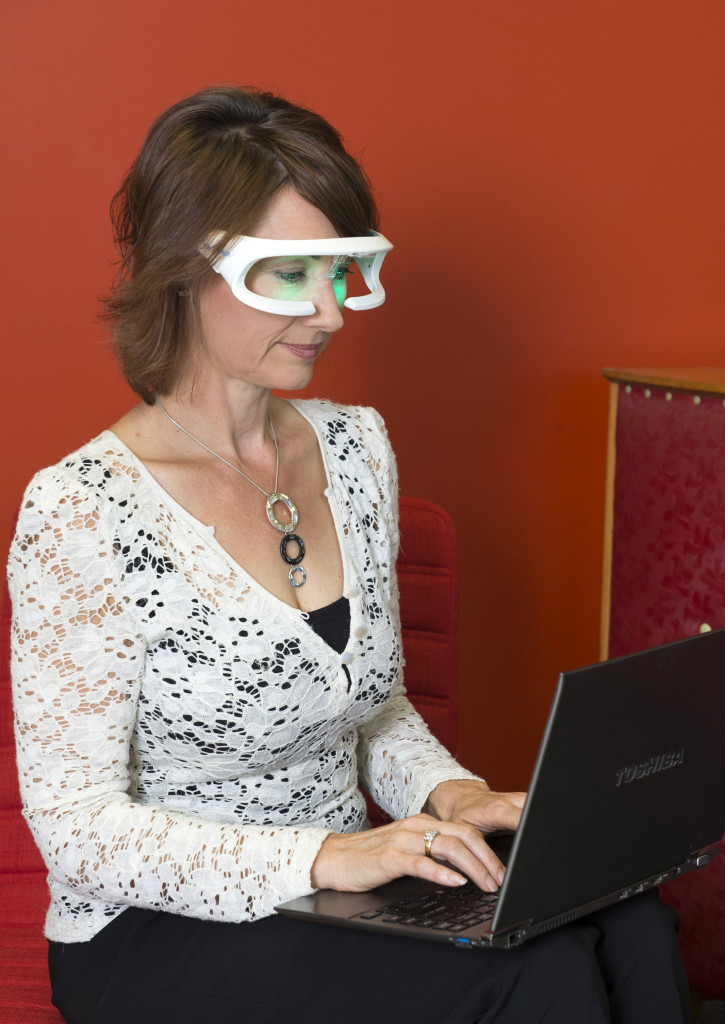 For Leticia, it was a matter of wearing the glasses for 30 minutes each night, starting at 10:00 p.m. and gradually moving forward from 10:30 to 11:00 to 11:30 p.m. and so on. By the third night, she was falling asleep and staying that way, and within just a few weeks, she no longer needed the glasses at all, enjoying month after month of solid sleep from June to November. What’s more, she has regained her energy and is once again enjoying outdoor activities.

“Re-Timer gave my wife her life back,” said Randy, who works in the pharmaceutical industry. “It’s an amazing product. We’re both very happy and the best part is we’re doing things together again.”

This winter, Randy decided to try the glasses himself as a way to beat the seasonal blues. By wearing the glasses for just 30 minutes after waking each morning, he said he feels rejuvenated.

“I feel more awake during the day and then I sleep better at night,” he said. “I don’t have a problem in the summer, but in the winter, I have a hard time waking up and getting going.”

The couple is so thrilled with their investment in Re-Timer, that their only regret is not trying the glasses sooner. Looking forward, they plan to use them on an upcoming trip to Australia and will wear the glasses in-flight to help combat jet lag. Both find the glasses very well designed and comfortable to wear.

At home, every now and then, Leticia finds her sleep pattern starts slipping into old habits. When it does happen, she uses the glasses to reset. “It was an investment that has been worth every penny,” she said.

“There’s nothing worse than not being able to sleep. I finally found my answer in Re-Timer.”

Re-Timer was developed at Flinders University following 25 years of University research. Worn for 30 minutes a day, the glasses adjust the body clock to help with sleep problems related to sleep-onset insomnia, early-morning awakening insomnia, the winter blues and jet lag. The glasses come with a 60 day money back guarantee and can be purchased from this website.

> Leticia’s experience is similar to that of many users, including Penny Palmer. Read about Penny’s story in her interview with Daily Mail UK here.