“I Cured Years of Insomnia”: How Woman Used Hi-Tech Glasses to Change Her Life 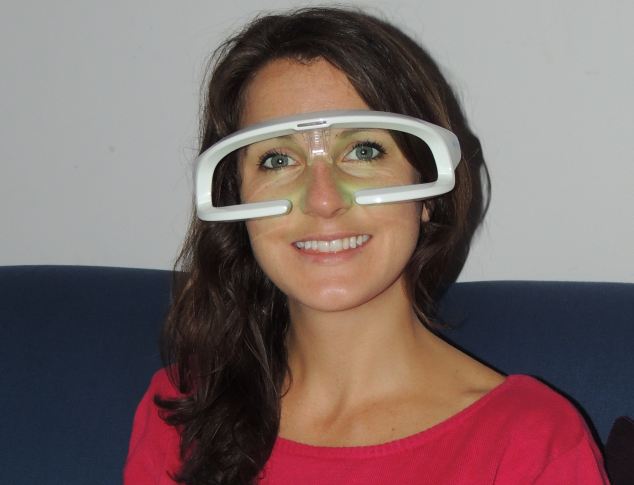 Penny Palmer, from Manchester, says the Re-Timer frames- which resemble goggles – have relieved her insomnia so much that she ‘no longer feels like a zombie’.

The glasses, which look like a pair of white frames without lenses, have small green LED lights at the bottom.

Penny Palmer, 29, suffered from severe insomnia which meant she always felt tired and emotional. Now, she is now able to get a good night’s sleep thanks to using Re-Timer sleep glasses.

These shine into the wearer’s eyes and are designed to help regulate their sleep patterns.

Ms Palmer, an events manager, said: ‘I don’t feel like a zombie anymore and I don’t get as tired or emotional. I have greater patience with people and more energy to get involved with things.’

“I’m not exaggerating when I say that it really has changed my life so much for the better.”

‘They are the only thing that has worked for me, and in a funny way they worked without me even realising it.’

The glasses work by shining LED lights into the eyes to mimic natural light. This helps to reset the body clock.

She struggled to get to sleep and was usually unable to sleep for more than two or three hours at a time before waking up again. As a result, she was constantly exhausted and the problem made her feel frustrated and angry.

She said: ‘At school, I would always fall asleep in lessons, and was always in trouble with the teacher who didn’t understand how bad my insomnia was.

How do the glasses work?

The Re-Timer sleep glasses work on the principle that the body has a natural sleep-wake cycle which is governed by the body clock.

This, in turn, is governed by light exposure. When the body clock is working correctly, people are able to fall asleep and wake up at the right times.

However, if the body clock becomes out of sync, sleeping problems can develop.

This is particularly common in the winter and in people who work shifts because the body clock is controlled by the natural cycle of light and dark and this can be disrupted by not receiving light at the right times.

The Re-Timer glasses, which were developed by researchers at Flinders University, in Australia, emit a green light which helps to reset the body clock by mimicking natural light.

‘It affected my health in other ways too – being tired made me feel run down and I was always getting viruses and infections.

‘If you caught me on a bad day when I hadn’t slept the night before, I could just as easily bite people’s heads off as burst into tears.’

She added: ‘I am quite an energetic person usually but on a night when I’d had no sleep I just wanted to crash and burn all day.’

Ms Palmer says she was often so tired that she had to cancel plans with her friends and call in sick to work.

She also avoided going on holiday anywhere in a different time zone as the jetlag would make her insomnia worse.

She said: ‘It really hampered my life and stopped me from doing everyday things that most people take for granted.’

She tried prescription sleeping pills which worked at first, but made her feel ‘like a zombie’ and left her concerned she would become dependent upon them.

As a result, she stopped taking them and her insomnia became worse than ever. She also tried natural remedies, yoga and meditation but none of these things worked. She says she also eats a healthy diet and takes regular exercise but this did not help either.

However, everything changed when she found out about Re-Timer glasses.

The glasses can be purchased online for $299 and are said to be able to help with jetlag, sleep problems associated with working shifts, winter blues, falling asleep too early and struggling to get to sleep.

She said: ‘I first heard about the Re-Timer glasses from a friend who had seen an article about it online.

‘I found it online and read a number of very positive reviews about it from people who sounded like they had a similar terrible experience to me with sleeping issues.

When do you wear the glasses?

Ms Palmer wears the glasses for 30 minutes every morning when she is getting ready for work.

‘I was at the end of my patience and decided that it was the last thing I was going to try before accepting that I’d be always have sleep problems and was just going to have my life ruined because of it.

‘They seemed quite expensive at $299 but there was a money back guarantee if they didn’t work in the first 30 days and so I thought it was worth a try – I had nothing to lose.’

Ms Palmer started by wearing the glasses for 30 minutes every morning after waking up.

She says that she didn’t expect them to work – but within a couple of weeks she noticed she was getting to sleep earlier and waking up earlier after a good night’s sleep.

As a result, she says she felt more refreshed, less groggy and generally happier.

She said: ‘That was six months ago and I am still using Re-Timer on a weekly basis to help me sleep.

‘I usually use them on Sunday and Monday mornings as this helps to set me up for a good week of sleep throughout the rest of the week.

‘I am actually going to bed at a reasonable hour and it’s not unusual for me to sleep through a full eight hours now.’

They are said to be able to help with jetlag, sleep problems associated with working shifts, winter blues, falling asleep too early and struggling to get to sleep.