“Light therapy was crucial to winning the gold medal”

In 2001, Maarten van der Weijden, a Dutch long distance and marathon swimmer, was confronted with cancer and his career was likely to be over.

Fighting against cancer he made his comeback in 2003. In 2006, he intensified his training regime and started using morning bright light therapy. Then in 2008, he won an Olympic gold medal at the Beijing Olympics.

To him, light therapy made all the difference.

“Within a month my performance in the morning increased spectacularly”, he said.

“The first thing I do is put my glasses on and light up”.

The below image shows the original article on page 3 of the well respected newspaper de Volkskrant in The Netherlands. A short online version about Maarten van der Weijden and his experience using light therapy is also available (please note it is in Dutch so you may need to click on the translate button). 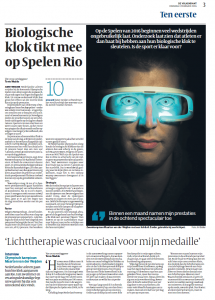